Home/Waterford/McClenahan, Michael A.
­
Previous Next

Michael A. McClenahan, 33, went home to be with the Lord April 3, 2016.
Michael was a loving and devoted husband and father. He enjoyed golfing, kayaking and hiking and recently took many trips to the Allegheny National Forest. He also enjoyed wood working.? Along with his wife, Heather, Michael was the activity organizer at the Union City Church of the Nazarene. 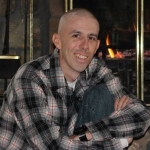 Michael defeated cancer after a seven year long fight, receiving multiple treatments and stem cell transplants. His spirit and love for life remained strong. Michael was under the care of Dr. James M. Rossetti (?Uncle Jimmy? to Addison), who became a trusted and beloved friend, and who is thought of as one of the family.

Michael is survived by his wife, Heather, and daughter, Addison who were his reason to fight.? Other family members include his mother, Connie Balek and husband, Jim of Corry; his father, Fred McClenahan of Union City; brother, David McClenahan and wife, Brittney of Union City; grandparents, Elwin (Buzz) and Marion Saeger of Cambridge Springs, and Donald and Edna McClenahan of Union City; in-laws Renea Campbell and Brian of Mill Village; grandparents-in-law, Kevin and Debbie Campbell of Waterford; sisters-in-law Ashley Cornwell of Union City and Danielle Cornwell of Waterford; and numerous aunts, uncles, cousins, nieces and nephews.
Michael was preceded in death by sister-in-law Megan Watson.

Memorial donations can be made to the American Cancer Society.