Ruth Marie Lawrence, 87, a long-time resident of the Waterford area, went home to be with her Lord and Savior on Sunday, the 23rd of October, 2016. 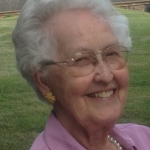 She was born on March 24, 1929 to the late Timothy and Julia Racop, of Cambridge Springs, PA. She was a kind-hearted, creative and generous woman who used her God-given talents to continually serve those around her. An excellent seamstress with a talent for upholstery, she shared her knowledge by teaching classes. She made many costumes for the musicals at Erie First Assembly, where she was a longtime member.

She was a member of the Waterford Garden Club for over fifty years. She had a green-thumb with a special touch for roses and grew many of her own fruits and vegetables. Ruth loved to bake fruit pies. Her daughters claim that their mother?s apple pie helped them win the hearts of their husbands.

A devoted wife, mother and grandmother, she found great joy in hosting family holidays and celebrations. She poured a lot of love into homemade, themed birthday cakes for each of her grandchildren.

Ruth was an avid traveler and loved spending time with her family, whether it was at home in Pennsylvania or elsewhere. She was fortunate to be able to go abroad several times and travel through most of the fifty United States.

She is preceded in death by her beloved husband, Reginald Lawrence. The pair met at a dance and danced through life together for 55 years. Reg was surely awaiting her arrival to glide with her on the streets of Heaven.

Friends may call at Van Matre Funeral Home, 105 Walnut Street, Waterford on Thursday from 2-4 and 6-8 p.m. Pastor Jack Risner of Erie First Assembly will officiate for the funeral service at the funeral home on Friday morning at 11:00 a.m. Committal service and interment will follow at Waterford Cemetery.