? Jeanne C. Anderson, 91, of North Prairie, Wisconsin and formerly Waterford, Pennsylvania, passed away surrounded by family on Monday, December 5th, 2016 at Geneva Lake Manor in Lake Geneva, WI. Born Jeanne Claire DeCoopman in Detroit, Michigan on December 15th, 1924, she was the daughter of the late Fred and Mildred (Smith) DeCoopman. 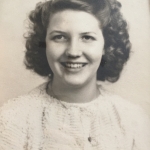 Jeanne was a member of the graduating class of 1943 from Addison High School in Addison, Michigan. On September 5th, 1945, Jeanne was united into marriage to the Kenneth Anderson in Somerset, Michigan. After Jeanne and Kenneth were married they relocated to Waterford where they lived on a small farm for over 65 years.

While living in Waterford, Jeanne became a member of the Waterford Garden Club. She was involved in the Calvary Evangelical Covenant Church and the Waterford Presbyterian Church.? Jeanne was an avid baker and loved to cook. She loved to garden, was a seamstress and a fantastic artist who loved to paint with watercolors.

Visiting hours will be at Van Matre Funeral Home in Waterford on Saturday, December 17th from 10:30 a.m. until time of the funeral service following at 12:00 noon. Rev. Emily Zeig-Lindsey, pastor of the Waterford Presbyterian Church, will officiate. Burial will follow in Waterford Cemetery. Visiting hours were also held in Lake Geneva, Wisconsin.

In lieu of flowers, donations in Jeanne’s memory may be given at the funeral home to Covenant Harbor or Mission Meadows Bible Camp.