?Park Robert Burdick, age 80, resident of 30091 Brown Road, Townville, PA for the past 40 years passed away on Monday, December 5, 2016 at Westbury United Methodist Community, Meadville, PA where he had lived for the past year. He was a son of the late Paul Nelson Burdick and Marie Ensel Burdick. After his schooling, Park remained on the family farm where he was engaged in dairy farming and raising pigs. He enjoyed a simpler life, loved the out-doors and hunting and fishing. He was a social member of American Legion Post #381 in Cambridge Springs. 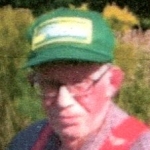 ????? Of a family of twelve siblings, Park is survived by four brothers – Clark Burdick of Meadville, Ellsworth Burdick of Saegertown, Nolan Burdick of McKean and Melvin Burdick of Townville. Several nieces and nephews also survive. He was preceded in death by six brothers – Paul, Nelson, George, Lloyd, Floyd, and Gene; and a sister – Marjorie Webber.