Dorothy J. Goodban, age 94, lifelong resident of McKean Township, passed away on Friday, December 2, 2016 in Warren, OH where she has resided since April of this year. Born May 15, 1922, she was one of two daughters of the late Cecil and Julia Kibbe Drown. 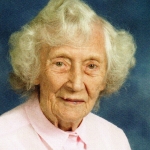 Dorothy graduated from McKean High School and attended Erie Business College. She was employed as a bookkeeper at Halle’s Department Store for 34 years retiring in 1977. She was a member of Halle’s 25 year club, the Daughters of the American Revolution, Waterford Chapter, and the McKean United Methodist Church where she taught Sunday School and was active in the Ruth Circle.

Dorothy married Clair E. Goodban on December 30, 1967 and he died March 28, 1997. She also was preceded in death by her sister, Betty Mientkiewicz, and a nephew, Patrick Mientkiewicz. She is survived by her brother-in-law, Chester Mientkiewicz of Niles, OH, and many nieces and nephews.

Friends may call at Van Matre Funeral Home, 105 Walnut Street, Waterford on Sunday afternoon from 3:00 until 5:00 p.m. A service will be held at McKean United Methodist Church on Monday at 11:00 a.m. officiated by Rev. Barb English. Interment will be in Valley Cemetery.

Memorials may be made to McKean United Methodist Church.