Ellsworth Clyde Burdick, age 84, resident of 30091 Brown Road, Townville, PA, passed away at Marquette Hospice House on Saturday, January 14, 2017. Born on September 27, 1931 in Meadville, PA, Ellsworth was a son of the late Paul Nelson Burdick and Marie Ensel Burdick. A veteran of the US Army, Ellsworth served from 1952 until 1954.? Ellsworth retired in 1996 from Penn Union in Edinboro after 25 years of work. He enjoyed fishing, hunting, and rides in the country. He was a social member of American Legion Post #381 and Conneauville Post #615. 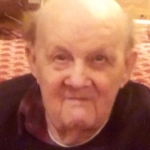 ??????Of a family of twelve siblings, Ellsworth is survived by four brothers – Clark Burdick of Meadville, Nolan Burdick of McKean, Melvin Burdick of Townville, and Gene Burdick of Conneaut, Oh; a sister-in-law: Dolores Burdick and several nieces and nephews. He was preceded in death by six brothers – Paul, Nelson (and his wife, Alice); George, Lloyd, Floyd (and his wife, Edna); and Park; a sister – Marjorie Webber (and her husband, Gene); and a sister-in-law: Lois Burdick (wife of Melvin) who died in 2015.

Visiting hours will be held on Saturday, January 21st from 1:00 until 4:00 p.m.at the Van Matre Family Funeral Home in Cambridge Springs. Funeral services will be held there at 3:00 p.m. with Marshall Lillie, chaplain with Hospice of Crawford County, officiating.