Mabel Charlotte Humes Drake, age 98, was welcomed into heaven by her heavenly Father on Monday, January 2, 2017 at Rolling Fields Elder Care in Conneautville. The love of her life, Phillip A. Drake, embraced her with loving arms. He had been waiting for her to join him for the past three years. It was known that when he first saw her he proclaimed “She’s mine”. They married when she was seventeen and he was age twenty on June 23,1936. They spent 77 years of married life together. 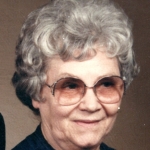 The Drakes moved to Nyack, NY in 1944 so Philip could further his education at what is now Nyack College. Mabel, his loving helpmate, sold Stanley Home products at parties and also opened Drake’s Plastic Specialties, a store offering plastic home goods.

She and Philip moved back to Cambridge Springs with a large family of six children in 1956. Philip returned to work at Talon, Inc. in Meadville where he worked as a drafting checker. Mabel worked for several small local firms and then started a wedding and floral shop serving many brides in the area.

In 1966, they relocated to Rochester, NY to work for Xerox. Mabel learned the art of making and decorating ceramics for which she won many awards. After Phil retired from Xerox they returned to Cambridge Springs and established Drake’s Ceramics which Mabel operated for numerous years. After a final retirement, she enjoyed spending time with her family, playing the organ and reading the Bible about her future life in Heaven with her Savior, Jesus Christ.

Friends may call at the Van Matre Family Funeral Home in Cambridge Springs on Friday Jan.6 from 2-4 and 6-8 . Further visitation will be held on Saturday, January 7th from 9:00 until funeral services beginning at 10:00 to be held at First Baptist Church, Cambridge Springs. Reverend Rod Beardsley, pastor of the church will officiate and Rev. Stephen Drake, son of Mabel and Phil, will assist. Interment will be in Gravel Run Cemetery.