Waid S. Fosburg, also known as “Fuz”, age 86, passed away at his home, 300 Church Street, Cambridge Springs, PA after an extended illness on Thursday, January 19, 2017. Born on August 28, 1930 in Cambridge Springs where he was a lifelong citizen, Fuz was a son of the late Philo and Minnie Leary Fosburg. He married the former Elaine A. Swift in 1950 who passed away on January 1, 1984 and subsequently married the former E. Lorene Reichel on December 4, 2000 who survives. 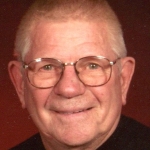 ?????? During his last years of high school before graduating in 1949, Fuz worked as a caddy at the Riverside Golf Course. Fuz then served in the US Army during the Korean Conflict. After being discharged, Fuz came to be known as a ‘Jack of all trades’. He worked for Edinboro-Redi-Mix, owned the Keystone gas station in Cambridge Springs and the Cambridge Car Wash. He later started Fosburg’s Alternator Service. He obtained his small engine pilot’s license, was a past member of the Cambridge Springs Fire Department and belonged to the Union of Operating Engineers, Local #66. He was proud of the fact that he never drank and never smoked. One of his favorite quotes was “you have to work hard to play hard, one without the other is worthless”.? Fuz enjoyed traveling and his many adventures in Hawaii, Australia, Fuji, New Zealand, Tahiti, and Puerto Rico. He loved his motorcycles traveling many times to Nova Scotia, Prince Edward Island, Newfoundland, Labrador and across the provinces of Canada. He traveled across the country several times with Alaska as his destination. Among Fuz’s other interests were camping, scuba diving, skiing, and boating. His prescription for life was ice cream.

There will be no calling hours. A private memorial service will be held at a later date. Waid’s family wishes to offer sincere thanks to Hospice of Crawford County, West for their love, care, and support. Memorials may be made to them at 464 Pine Street, Meadville, PA.