Norma Mae Weindorf Jaworski, age 95, of Erie, PA and Poinciana, FL, passed away Tuesday, January 3, 2017 at Sarah A. Reed Retirement Center, Erie, PA. Born in Erie on March 24, 1921, Norma was the daughter of the late Norman and Anna Shaw Weindorf. 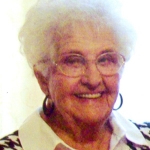 Living in Erie most of her life, Norma worked as a sales associate and assistant buyer for Halle’s and Trask’s department stores, and she operated Norma’s Ceramics at her home on East 29th Street. She retired after working at General Electric for 10 years.

After she and her husband, Joseph P. Jaworski, both retired, they moved in 1979 to Poinciana, FL where she actively volunteered for several organizations including the local school, hospice, and her church, St. Rose of Lima, of which she was a founding member. She was a very kind and giving woman. Norma moved back to the Erie area this past August to be near her family.

Services will be private for the family.