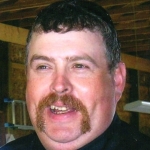 Mike married Sarah Diehl on August 25, 2001, and their family includes three children- Hannah, Aubrey, and Levi. Mike loved them all very much and will be sadly missed. Together, they operated the family farm, and even after selling the dairy cows, Mike enjoyed raising animals with his daughters for 4-H, and driving his tractor, “Big Blue”, with his son.

Mike was a likeable fellow with many friends, some of whom called him “Chunker”. He enjoyed breakfasts with his friends at Jakes in Waterford, and he loved to hunt, fish, play golf at Mound Grove, and watch the Steelers.

In addition to farming, for many years Mike worked at Waterford Precast, and for the last five years, he was employed with Parkside Utility. He belonged to the American Legion Post 285 in Waterford, and the Union City Moose Lodge.

Family members that preceded him in death include his parents, and a sister, Vicky Schwab.

Besides his wife and children, Mike is survived by two sisters, Debbie Spain of Erie, and Dale Robertson-Post and husband Fran of Waterford; two nieces whom Mike considered sisters, Angela Proctor and husband Steve, and Heather Conn and husband Geoff, all of Waterford; his brother-in-law, Dean Mitulski and wife Tasha of Corry; and several other nieces and nephews.

Friends may call at Van Matre Funeral Home in Waterford on Wednesday from 2-4 and 6-8 p.m. and are invited to funeral services there Thursday at 10:00 a.m. Officiating will be Pastor Randy Carr of Beaverdam Mennonite Church. Burial will follow in Waterford Cemetery.