Lena Anen Rossi went home to be with our Lord on Monday, January 23, 2017 at the age of 91 years old. She was born on January 21, 1926 in England, to George and Sarah Commander. Lena moved from England to Illinois then to Waterford, PA. She first married George Anen and he preceded her in death, then she married Frank Rossi, and he also preceded her in death. 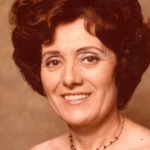 ?? Lena worked at Dahlkemper’s Jewelry Store and several jewelry stores. She had a kind heart and would do anything to help anyone. Lena was a very caring person. She belonged to the Waterford Church of the Nazarene and knew her Savior and Lord.

A memorial service will be held at the Waterford Church of the Nazarene on Saturday, January 28th at 11:00 a.m. with Pastor Gregory Jack officiating.