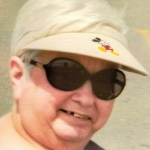 Sally was a dedicated volunteer and employee for WQLN in Erie for 25 years. She enjoyed camping, crafting, baking and cooking, spur of the moment drives with her sweetheart Ray, spending time with her children and grandchildren, and playing and singing music with her family.

Friends may call at Van Matre Funeral Home, 105 Walnut Street, Waterford, PA on Friday from 2-4 and 6-9 p.m. Funeral services will be there Saturday at 10:00 a.m. officiated by Rev. Gary Donaldson of Asbury Methodist Church in Waterford.

Memorials may be made to the American Heart Association or the Wounded Warriors Project.