On February 5, 2017, our beloved Stephen Michael Butcher, age 55, went to be with the Lord passing away at his home in Cambridge Springs, PA. Born on March 11, 1961, his family moved to Gahanna, Ohio where he received his education from St. Mathews and Gahanna Lincoln High. After his schooling he worked in a ware house, was a landscaper and did other various jobs.? He loved Ohio State sports and fishing. 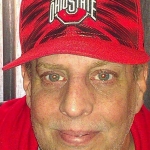 ????? Stephen was preceded in death by his father – Robert Butcher and two nephews. Surviving Stephen is his mother – Doris Simoneau Butcher Queen of Gahanna; his sons – Gregory Butcher? of Middletown, Ohio and Brandon Ankrom of New Albany, OH; his siblings – Susan Myers; Robert Butcher; Denise Butcher Woodward; Diane Butcher Blancett; and Jason Queen. He is also survived by several nieces and nephews and his many friends including the Chadwicks and the Rickmans all of whom he spoke very dearly. His companion, Deborah Schell, spoke these word “I love you and will miss you dearly”. She would like to thank Aimee Brown, Arendes and Thomas Luzier for being with Stephen at the time of his passing.

At a later date memorial services are being planned in Gahanna, Ohio and in Cambridge Springs. Memorial donations may be made for cancer research.