Howard V. Donofrio, age 81, of Waterford, passed away peacefully on Sunday, February 26, 2017 after a lengthy illness. He was born in Brooklyn, NY on June 1, 1935, the son of James and Virginia Cox Nopio Donofrio. 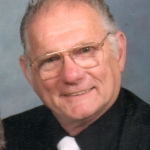 Howard attended Academy High School and later enlisted in the U.S. Marine Corps serving in the Korean War. He worked at Presque Isle Plastics, Country Tavern, and retired from Cathedral Prep after over 20 years where he was head of maintenance and a great mentor to many students.

In addition to his parents, “Howie” was preceded in death by his step-mother, Marie Donofrio; his first wife, Shirley, and his most recent wife of 37 years, “His Franny”. Also, a son Dennis; daughter Pauline; mother-in-law Helen Reitz; and two brothers-in-law, Don Butts and Jack Nesselhauf.

Howard is survived by five children– Jeffrey (Sandra), Dianna, Kevin (Katrina), all of Florida; two step-children– Craig Cashore and Tammy Weary (Ron) of Waterford; two sisters– Connie Nesselhauf of Corry and Leona Butts (Bob) of Fairview; and a “favorite” brother-in-law, John Reitz (Linda) of Erie. He also leaves behind many grandchildren, great-grandchildren, and special friends whom he adored.

Family and friends may call at Saint Marks Lutheran Church, 930 High Street, Waterford, on Saturday, March 11th from 1:00 p.m. until the time of a service at 3:00 p.m. officiated by Pastor Al Gessler.

In lieu of flowers, memorials may be made to St. Marks Church, or the Erie Veterans Affairs Medical Center.