Cynthia S. Bentley Simonoff Ishman, age 90, of Waterford, went to be with her Lord and Savior Jesus Christ on Saturday, February 18, 2017 at UPMC Hamot. Born July 7, 1926 in Corydon, PA, she was a daughter of the late Ivan E. Bentley and Cecelia R. Flatt Bentley. 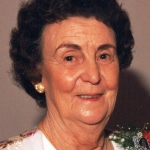 Cynthia married Clarence E. Ishman on August 21, 1963, and later moved from Erie with their young family out to a farm on Scott Road in Waterford where she lived until recently. A devoted wife, mother and grandmother, she enjoyed the farm lifestyle, and also cooking and baking, evidenced by her specialties of potato salad, rolls and pies. Cynthia was an active member of the Waterford Baptist Church, and a dedicated believer realizing the importance of daily Bible reading. She leaves behind a legacy of faith, love and courage.

Cynthia’s husband, Clarence, preceded her in death on July 1, 2012; she is further preceded by her daughter, Sandra K. Simonoff; a son, Matthew I. Simonoff; a step-son, Dennis E. Ishman; and two sisters, Dorothy Young and Nancy Esser.

Friends may call at Van Matre Funeral Home in Waterford on Tuesday from 4-7 p.m. and are invited to funeral services there on Wednesday morning at 11:00 a.m. Officiating will be Pastor Mike Wells of Waterford Baptist Church. Burial will follow at Waterford Cemetery.

Memorials may be made to Orphan Angels Cat Sanctuary, 5439 West Lake Road, Erie, PA 16505, or to Disabled American Veterans.