Mary J. Jagta, age 89, of Waterford, passed away Friday, February 17, 2017 at Edinboro Manor. Born September 22, 1927 in Youngsville, PA, she was the daughter of the late Clayton and Verna Wood Young. 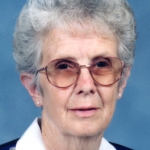 Mary was married to Frank F. Jagta on July 11, 1947, and early on, they bought a farm and moved to Waterford. She was primarily a homemaker, raising her family on the farm, enjoying gardening, canning and freezing, and also sewing and crocheting, for she was a talented seamstress. Mary additionally worked outside the home for many years at Heard’s Drug Store and Fort LeBoeuf Schools.

Ever since Mary moved to Waterford, she was an active member of Asbury United Methodist Church. She loved her many friends there and the Homebuilders Class that she was a member of for so many years. Mary also enjoyed playing cards with the Dublin Road Card Club. She loved her family and friends very much and will be missed.

Her husband Frank preceded her in death on April 23, 2005; and also, her twin sons, David and Frances; and her brother, George Young.

Friends may call at the Van Matre Funeral Home in Waterford on Monday evening from 6-8 p.m. Funeral services will be held at Asbury United Methodist Church in Waterford Tuesday morning at 11:00 a.m. Rev. Gary Donaldson will officiate. Interment will be in Waterford Cemetery.