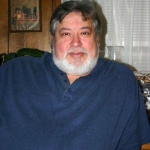 Larry was a great husband, dad, brother, uncle, nephew, and friend. He loved his Minnesota Vikings and Cincinnati Reds, and spending time with his wife Laurie, son Tyler, and yorkies Buffy and Peanut, and Whiskers the cat.

Larry was always known for being a hard worker at Rogers Steel, Buffalo Structural Steel, and Carrara Steel. He was also known as the favorite uncle by his many nieces and nephews. With his great sense of humor and funny stories, he always had his way of making a lasting impression.

He was preceded in death by his parents, John and Della (Christine) Patrick Johnson, and two brothers, Richard “Jimmy or Rebel” Johnson and Johnny Johnson.

Friends and family may attend visiting hours at Van Matre Funeral Home in Waterford on Saturday, February 11, from 3:00-5:00 pm.

In lieu of flowers, donations may be made in Larry’s memory to a charity of choice.