Melvin L. McGinnett, age 76, of Mill Village, passed away Thursday, February 2, 2017 at LECOM Senior Living Center where he had resided for over a year. Born in Mill Village on April 27, 1940, he was the son of the late Willis (Mac) McGinnett and Louise Kerr McGinnett. 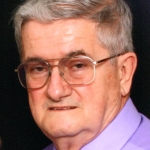 Melvin loved his family and especially enjoyed spending time with his grandchildren. He was a lifetime member of the Mill Village Fire Department and had been employed at PHB Industries for 30 years. He enjoyed hunting, camping, and woodworking.

In addition to his parents, he was preceded in death by his wife, Sandra Kimmy McGinnett, who died November 18, 2015; a granddaughter, Alyssa Miller; and two sisters, Mae Amoroso and Laura (Herky) Culbertson.

Family members include his two daughters, Vickie Babcock of Waterford and Darlene Miller of Meadville; four grandchildren, Tyler and Chelsea Babcock, and Stephanie and Andrew Miller; a sister, Dorothy Thomas and husband Paul of Union City; a brother, Clyde McGinnett of Mill Village; and several nieces and nephews.

Friends may call at Van Matre Funeral Home in Waterford on Saturday from 2:00 until time of the funeral service at 6:00 p.m. Burial will be in Mill Village Cemetery.

Memorials may be made to Mill Village Fire Department.