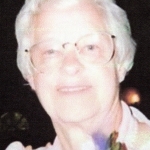 Along with her parents, she was preceded in death by her husband in 1995; five sisters– Bernice Steele, Beulah Wiggins, Thelma Haldin, Claribel Elkin, and Lucille Brink; a brother, Jack Lydic; two sons– Gary and Douglas Lydic; and a granddaughter, Colleen Waddell.

After retiring from Elgin Electronics after 24 years, Louise worked for Mugs Restaurant. She was a devoted wife, mother and grandmother, and after retiring, she and her husband were able to travel with her sister, Sara Mae and her husband, Bruce. She enjoyed spending time outside working in the garden or yard, but mostly spending time with her family.
Louise had a strong faith and attended the Church of Jesus Christ of Latter Day Saints for many years where she served in many areas of the church positions.

Family and friends are invited to Van Matre Funeral Home, 105 Walnut Street, Waterford on Friday, April 28th from 5:00 p.m. to 8:00 p.m. Further viewing hours will be at the Church of Jesus Christ of Latter Day Saints, 1101 South Hill Road (Kuntz Road), Erie on Saturday from 10:00 until 11:00 a.m. with the service immediately following at the church.

Interment will be at Erie County Memorial Gardens beside her beloved husband.