Patricia Ann Tynecki Morrison, age 74, formerly of Edinboro and Fairview, passed away after a long illness on Friday, April 21, 2017 at the home of her daughter in Greensburg, PA. Born in Erie, she was the daughter of the late Joseph and Rose Marie Wiercinski Tynecki. 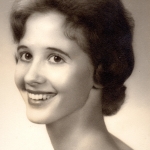 Before retiring in 2004, Pat worked at the Erie County Hospital, the Erie County Library, the KOA Campground in McKean, and Fairview School District. She and her husband, Edwin R. Morrison, moved to Jamestown, PA in 2013.

Pat was a former member of Franklin Center United Methodist Church, and now a member of the Jamestown United Methodist Church, and she belonged to the Erie Hunt and Saddle Club, and the Pymatuning Motor Boat Club where she was a director. She loved her family dearly and enjoyed her many animals over the years. For the past 9 years, Pat and Ed spent their winters in Florida and made many close friendships.

Friends may call at Van Matre Family Funeral Home, 306 Erie Street, Edinboro on Wednesday from 6:00 until 9:00 p.m. Funeral services will be there Thursday morning at 10:00 a.m. with Rev. John Hodge and Rev. Alan Morrison officiating. Burial will follow at Waterford Cemetery.

Memorials may be made to any local hospice organization.