John graduated from Cambridge Springs High School in 1952. His first employment was a bell hop at the Riverside Inn in Cambridge Springs. He later worked at General Electric in Erie. Through the 1960’s, he worked at the Edinboro IGA supermarket. In 1970 he and his business partner, Larry Wellman, purchased and managed the business (later known as John & Larry’s Shurfine) for over 25 years. With his outgoing, quick-witted personality, he was a man that everyone knew, enjoyed and respected. His success can be attributed to his natural “street-smarts”, kindheartedness, out-going personality, and ambitious work ethic.

He married the former, Shirley M. Grove on May 7, 1955. They resided in the Pleasant Hills housing development which was previously his parent’s homestead and farm. 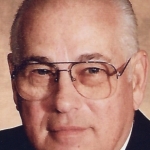 Friends are invited to call on Tuesday, June 27th from 2-4 and 6-8 at the Van Matre Family Funeral Home in Cambridge Springs. Funeral services will be held there on Wednesday, June 28th at 10:00 a.m. with Reverend Darrell Greenawalt, pastor of Saegertown United Methodist Church, officiating. Entombment will follow at Roselawn Memorial Gardens, Meadville.