Betty Jo Ikard Jenkins, age 87, a Waterford Township resident since 1950, died on Sunday, June 4, 2017 at her home. Born in Clayton, New Mexico on August 5, 1929, she was a daughter of Sullivan Ross and Verne Eddins Ikard. 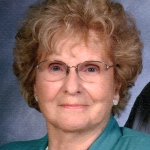 Betty graduated from Pecos High School and attended Texas Tech in Lubbock, TX. She married John Robert Jenkins on July 10, 1947 in Pecos, TX and was married for 65 years at the time of his death on April 14, 2013.

Betty retired from Elgin Electronics in 1993 after 35 years, and was a member of the First Presbyterian Church of Waterford. She enjoyed reading, flower gardening, playing cards and board games, but most of all, her family.

She is survived by her daughter, Rebecca Hull and her husband Chuck of Union City; two sons, John I. Jenkins and Michael S. Jenkins, both of Waterford; six grandchildren: Douglas Thomas of Mount Washington, KY, Stacy Thomas of Garner, NC, Shelly Wright and her husband Brian of Union City, Jennifer Hayes of Edinboro, and Samantha and Christine Jenkins of Waterford; and several great-grandchildren, nieces and nephews.

Friends are invited to call at Van Matre Funeral Home in Waterford on Thursday from 2-4 and 6-8 p.m. and may attend the funeral service, officiated by Rev.?Emily Zeig-Lindsey,?on Friday morning at 11:00 a.m. Interment will be in Waterford Cemetery.

Memorials may be made to the First Presbyterian Church, 112 West 3rd Street, Waterford, PA 16441.