Home/Waterford/Laskowski, Matthew A.
­
Previous Next

Matthew A. Laskowski, age 87, of Erie, passed away Thursday evening, June 22, 2017 at LECOM Senior Living Center after a period of failing health. 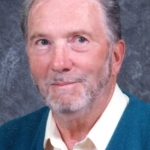 A lifelong resident of Erie, he was a son of the late Adam and Stella Laskowski. He graduated from East High School where he participated in cross country, track & field, varsity basketball and boxing. Matthew continued to enjoy sports all his life and played baseball for the GE Blues in the City League, and later played softball for the GCS Club and Brookside Tavern. He loved the game of golf and was an active member of the Lawrence Park Golf Club, he was a former member of the East High Boosters, and he, his brothers and their sons were active participants in the Brothers Bowling Association.

Friends are invited to call at Van Matre Funeral Home, 105 Walnut Street, Waterford on Monday starting at 11:00 a.m. until 1:00 p.m. at which time the funeral service will begin. Officiating will be Larry Norman, Matthew’s son-in-law. Burial will follow at Waterford Cemetery.