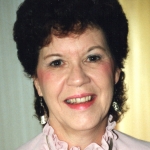 Many will remember June from her 26 years working at JC Penney in the Millcreek Mall.

There will be no services.