Doris R. Peters, age 89, resident of 24680 State Highway 408, Cambridge Springs, PA, passed away on Sunday, July 9. 2017 at Crawford County Care Center, Saegertown, PA. Born on October 15, 1927 in Meadville, PA and living most of her life in the Cambridge Springs area, Doris was a daughter of the late William Stavey and Blanche Hane Stavey. After the death of her father when she was age 2, she was later adopted by Lona B. Hammond and Mae Hammond Stanford. Her father was the original owner of the Brown Hill store and Doris considered herself to be the Nellie Olson of Brown Hill. Her mother, Mae Hammond Stanford died in November of 1981. On June 25, 1944 Doris married Russel L. Peters and he preceded her in death on January 14, 1976. 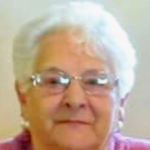 ??????Doris was a member of the Christian and Missionary Alliance Church in Cambridge Springs? where she had served as a deaconess. She had previously belonged to the Brown Hill United Methodist Church where she taught Sunday school and sang in the choir.

Memorials may be made to the Christian and Missionary Alliance Church building fund, 257 Church Street, Cambridge Springs, PA, 16403.