Daniel Robert Lee Sr., age 70, of Edinboro, passed away peacefully at his home on Tuesday, October 17, 2017 after a courageous battle with cancer. Born and raised in Oil City, PA, he was one of two sons of the late Charles and Mildred Hoover Lee, born on August 22, 1947. 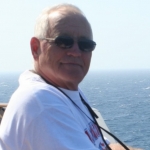 After graduating from school in 1965, Dan enlisted in the U.S. Coast Guard and served his country until 1970. He married Vickie Lynn Bice on August 1, 1970 and lived in Cooperstown, PA until moving to Edinboro in 2004.

Dan was a self-employed cabinet maker working until his retirement in 2008 because of illness. He was a talented carpenter and had great skills in restoring furniture and antiques. Many homes and businesses to this day display his handiwork.

Dan served his community by volunteering as a fireman- 25 years in Cooperstown and 7 years in Edinboro. As a member of McLane Church in Edinboro, he could most often be found in the kitchen, working side by side with and enjoying the company of close friends.

He was most proud of his family and loved them more than anything. He taught them all he knew about the great outdoors, for he was a avid hunter and fisherman.

Friends may call at Van Matre Family Funeral Home in Edinboro on Thursday from 6-8 p.m. and may attend the funeral service there Friday at 11:00 a.m. Officiating will be Pastor Mike Priestap of McLane Church.

In lieu of flowers, memorials will be accepted by the family.