Mary M. McAraw, age 86, passed away peacefully from complications from the flu on Thursday evening surrounded by loving family. She was born in Duquesne, PA on August 10, 1931. 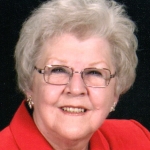 Mary was a graduate of St. Peter High School, McKeesport, PA, Class of 1949. She was a former member of St. Elizabeth Ann Seton in North Huntingdon, PA, and a member of the Christian Mothers. Mary loved her time spent as a part of the White Oak Legion #701 Seniors, and the White Oak #2294 AARP groups. She spent many hours as a UPMC McKeesport Junior Committee and Gift Shop volunteer.

Friends and family will gather at Van Matre Funeral Home, 105 Walnut Street, Waterford, PA on Wednesday February 7th from 2-4 and 6-8 p.m. All are invited to a prayer service there Thursday morning February 8th at 9:15 a.m. followed by a 10:00 a.m. Mass of Christian Burial at All Saints Parish celebrated by Father Greg Passauer, Father John McKenna, and Deacon Tom McAraw. Burial will be private.