Nancy Carol Wasson, age 91, of 24875 Felton Avenue, Cambridge Springs passed away on Saturday, March 17, 2018, at her home of natural causes. Nancy was born on March 13, 1927, in Conneautville, PA daughter of the late Gordon Mead and Helen Bebee Mead. Nancy graduated from Conneautville High School with the class of 1945 and attended cosmetology school in Pittsburgh. After working as a beautician for several years, she then dedicated her life to raising her family. She was an accomplished baker and cook who also enjoyed gardening, sewing, 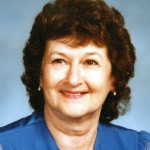 country and big band music and delighted in hosting family dinners and parties. Her greatest joy was traveling in the continental United States with her husband, Ron, in their RV.? Nancy was a fun loving mother, grandmother, and great-grandmother (Gigi).

She was preceded in death by her husband, Ronald L. Wasson, whom she married on December 13, 1957; her daughter, Robin Joan Styborski, who died on June 1, 2017; twin great grandsons: Corbin and Colten Nehl; her sister, Joan Caretti; brothers, John Mead,? David Mead, and Daniel Mead.

Friends may call at the Van Matre Funeral Home in Cambridge Springs on Friday, March 23, from 2-4 and 6-8 p.m. and are invited to a funeral service there on Saturday, March 24, at 11 a.m. Interment will be held at Cambridge Cemetery.