Gladys Fuller, age 91, of Waterford, passed away on Friday, April 20, 2018 at Pleasant Ridge Manor, Girard, PA after a long illness. 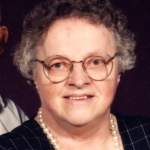 Gladys was born to the late Frank Harold Raybuck and Ella Hetrick Raybuck in Pansy, PA on March 8, 1927, the youngest of seven children, all of whom are now deceased. She married Charles Irvin Fuller on February 21, 1947 and moved to the Erie area in 1951. They lived together in their present home in McKean Township from 1954 until his death on March 18, 2012.

Gladys was a member of the McKean United Methodist Church, and she had many interests including gardening, hunting, fishing, and quilting. She loved being a homemaker.

Friends may call at Van Matre Funeral Home, 105 Walnut Street, Waterford on Tuesday from 2-4 and 6-8 p.m. and may attend the funeral service there Wednesday morning at 11:00 am. Rev. Barbara English of the McKean United Methodist Church will officiate. Burial will follow at Valley Cemetery.

Memorials will be accepted by the family at the funeral home.