Merritt Mitchell, age 89, of 557 South Main Street, Cambridge Springs, PA, passed away peacefully at his residence on April 14, 2018.? Merritt was born the son of Merritt and Pearl Locke Mitchell in Greenville, PA, on August 26, 1928. He joined the United States Army in 1949, and served until 1953. In his early years he worked at General Electric and in 1956, he began his career as a plumbing, heating, and cooling contractor of which he continued into his early 80?s. Merritt was a volunteer with the Cambridge Springs Volunteer Fire Department for forty-six years, a member of VFW Post 169, Venango-where he had served as commander and district commander; and a member of American Legion Post 381 in Cambridge Springs. 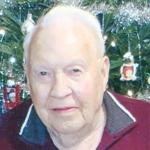 Friends may call at the Van Matre Funeral home in Cambridge Springs on Monday, April 16, from 2-4 and 6-8 p.m. and are invited to a funeral service there on Tuesday, April 17, at 11:00 a.m. with Pastor Joe Samalenge officiating and Rev. David Ewing assisting. Interment will be at Mitchell Cemetery.