Pearl E. “Minnie” Ryan, age 84, of Guys Mills and formerly of Waterford, passed away Monday, April 9, 2018 at Meadville Medical Center after a short illness. Born in McKean, PA on July 21, 1933, she was one of ten children of the late Leroy and Mildred Leube Parker. 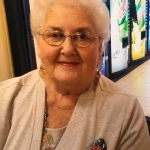 Pearl grew up in Branchville and graduated from McKean Joint High School. For most of her years she resided in Waterford where she raised her family with her husband, Douglas Earl Ryan. Pearl retired from Elgin Electronics in Waterford and moved to Sheffield, PA for several years, and then to Cambridge Springs and Guys Mills, living with her daughter Pam.

Pearl was very talented at many things including ceramics, jewelry making, and painting wedding cake toppers. She taught ceramic painting at the Sheffield Senior Center where she was a member and enjoyed many friendships. She also enjoyed her flowers and watching birds, especially hummingbirds.

For 49 years, Pearl was active with Al-Anon and AA. In 2009, she was honored as the Senior Queen at the Warren County Fair.

Friends may call at Van Matre Funeral Home in Waterford on Friday from 2-4 and 6-8 p.m. and may attend funeral services there Saturday at 10:00 a.m. Pastor Michael Fraser from Lyona Bible Church will officiate. Burial will follow at Sterrettania Cemetery.