Joanne Elaine Steadman, 82, of 16780 Center Rd., Cambridge Springs passed away peacefully at her home on April 28, 2018. She was born on April 6, 1936, daughter of the late Fredrick Gustave Beier and Rowena Henshaw Beier. Joanne worked as an assembly supervisor at Penn Union, Edinboro for over thirty-two years retiring in 1998. She particularly enjoyed reading, crocheting, knitting, playing bingo, and spending time with her family. 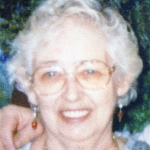 ?????She married her husband, Arthur Raymond Steadman on January 19, 1952, and he preceded her in death on December 31, 2014; She was also preceded in death by her brother, Robert Beier, Sr. and her sister, Jackie Beier.

Friends may call? at the Van Matre Funeral Home in Cambridge Springs on Sunday, May 6, 2018, from 1-3. A funeral service will follow at 3 p.m. Interment will be in Venango Cemetery.