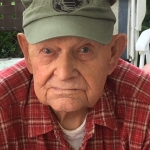 1947 he married the love of his life, Shirley (Burger) Nosko. They celebrated 69 years together before her passing on January 22, 2017. Also preceding him in death was a grandson, Andrew, and many brothers and sisters.

Robert proudly served as a U.S. Marine in the Korean Conflict and served in the Reserves before being honorably discharged. He worked most of his life for the Operations Engineers and was very proud of his many positions, especially his part in the building of Kinzua Dam.

He is a lifetime member of the American Legion Post 285 and also the Marine Corp League.

Robert is survived by his two daughters- Regina (Mike) Ripley of Waterford and Heidi (Bill) Shakespeare of Mill Village; two foster sons- Raymond and Randy Crawford, both of Erie; three grandchildren- Brigitte and Adam Ripley, and Gretchen Shakespeare; four great-grandchildren- Madison, PJ, Jasmine, and Gabe; and many nieces and nephews.

Family and friends are invited to visit with the family on Wednesday evening, July 11th at Van Matre Funeral Home in Waterford from 6:00 p.m. until time of the memorial service at 7:00 p.m. Burial will be private.

A special thanks to Heartland Hospice, and Jessica and the Davita family of Corry.

Memorials may be made to LeBoeuf Cemetery Association or to the family.