Duane R. “Dewey” Behnke, age 86 of McKean, passed away Tuesday, August 28, 2018 at Saint Vincent Hospital. Dewey was born in Erie on January 26, 1932, the son of Rolland and Millia Ponzanelli Behnke. 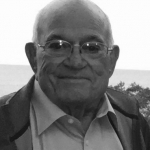 Dewey served his country in the U.S. Navy aboard the North Hampton from 1955-1957. After returning home to McKean, he worked for several years as a mechanic before attaining his insurance license and becoming an agent for Nationwide Insurance. He and his wife Betty Lou had the Nationwide Insurance Agency in McKean for over 30 years.

Dewey was active in his community. He joined the McKean Hose Company when he was 18 years old, served on the General McLane School Board for many years, was a member of the Masonic Lodge of Edinboro, the McKean Lions Club, and a member of McLane Church.

In addition to his parents, Dewey was preceded in death by his brother – Rolland Behnke; and three sisters – Phyllis Hanifin, Audrey Spadacene, and Nance Dylewski.

Dewey is survived by his wife Betty Lou Kilbane Behnke, whom he married on July 9, 1955. He is also survived by a daughter – Lisa Behnke Sheets and her husband Douglas of Meadville; and a son – Kenneth Behnke and his wife Carrie of McKean; three grandchildren – Robert Sheets and wife Lacey; Ashley Behnke Stafford and husband Andy; and Courtney Behnke; six great-grandchildren – Carter and Lorelei Sheets; Izzie and Chase Behnke; and Averie and Brewer Stafford; and a sister – Dorothy Zimmer.

The family would like to thank the caregivers at Forestview Nursing Center and Saint Vincent Hospital.

Calling hours will be held at the Van Matre Funeral Home, 306 Erie Street, Edinboro, on Thursday from 2-4 and 6-9 p.m.. A funeral will be held there on Friday at 11:00 a.m. Burial will be in Dunn Valley Cemetery.

In lieu of flowers, memorials may be made to the Benevolence Care Fund of McLane Church, 12511 Edinboro Road, Edinboro.