Home/Edinboro/Sheffer, Roland B.
­
Previous Next

Roland B. Sheffer, age 81, of Edinboro, passed away peacefully on Tuesday, August 28, 2018 at his home with his loving family. 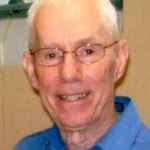 Roland was born in Erie, PA on May 19, 1937. He attended Edinboro Area High School, and after graduating he entered the U.S. Navy Reserves. He then attended Bailey Technical School in St. Louis, MO. On April 13, 1963, Roland married Judith Ann Merchant, who survives. He owned and operated an auto garage and inspection shop, and was hired at General McLane School District where he worked for the next 30 years, retiring as the Transportation Supervisor in 1996.

Roland was a member of the Franklin Center United Methodist Church where he served as a trustee for 30 years. He was an outdoorsman who loved to hunt with his brother, Jack and his friend, Art. He also loved to ride his bicycle, often riding 50 or more miles at a time. He bicycled with his brother and sister-in-law, and he often rode for the Erie United Methodist Alliance Refuge benefit rides. Roland loved his outings to Pizza Hut in Edinboro where he got to see his favorite waitress, Jen. And he loved his family. He always attended his kids’ and grandkids’ sporting events, even after working all day. Sometimes he drove the team bus to track meets.

In addition to his wife, Judith Ann Sheffer, survivors include a son, Brian Sheffer and wife Natalie of Nathalie, VA, and Brenda Wright and her husband Dean of Edinboro; five grandchildren- Owen, Brandon, Morgan, Brianna, and Samantha; one great-grandson, J.J.; and a brother, Jack Sheffer and wife Judy, and a sister, Betty Borland.

He was preceded in death by his parents, William and Gladys Sheffer, and a nephew, John Sheffer.

Visiting hours will be at Van Matre Funeral Home in Edinboro on Friday from 2-4 and 6-8 p.m. The funeral service will be at Franklin Center Methodist Church on Saturday at 11:00 a.m. with burial following in Sterrettania Cemetery.