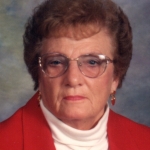 Born on the family farm on Mackey Hill on February 14, 1928, she was the daughter of the late Charles and Juvia Brown Chapin. Born at only three pounds, she thrived under the care of her family. She loved the family home and farm life.

Naomi graduated from Cambridge Springs High School and went to work at General Electric. She is a member of the former Mackey Hill United Methodist Church and attended both Beaverdam Mennonite Church and Draketown Christian Church with her daughters.

She met the love of her live, Virgil (Jack) Clute and they were married September 10, 1948. He predeceased her on January 19, 1982. Besides her parents and husband, she is predeceased by her brother, Owen Chapin; sister and brother-in-law, Joan and Dale Carr; and grandson, Bryan Klapthor.

Visiting hours will be at Draketown Christian Church in Edinboro on Tuesday from 10:00 a.m. until time of the funeral service at 12:00 noon. Rev. Daryl Myer will officiate. Interment will follow in Waterford Cemetery.

Memorials may be made to the Mill Village Volunteer Fire Department.