Winifred Letitia Hagen Hanna, age 87, of Union City, died Tuesday, September 11, 2018 at Westlake Woods in Erie. Wini was born August 22, 1931 in Lancaster County, the daughter of the late Harry G. Hagen and Elizabeth D. Eager Hagen. She attended Lancaster County Schools, and during WWII, cared for her nieces and nephews allowing her sisters to work in factories 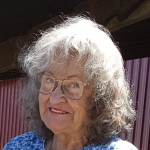 for the war effort. She worked at Schick Shaver, Hubley Toys, Specialty Screw and various sewing and candy factories in and around Lancaster. Later, she worked at various restaurants, nursing homes and private homes in Erie County.

Wini married Donald E. Hanna, son of the late David M. Hanna and Mildred Leone Hanna on May 15, 1953, and he preceded her in death.

She is survived by a daughter, Cindi L. Hanna; a son, David H. Hanna and his wife Nancy; her nephew, Pastor Donald Hagen and his wife Mavis; and many great and great-great nieces and nephews. She was preceded in death by her two brothers, Louis C. Hagen and Lester G. Eager; and her two sisters, Catherine B. Beck Pietsch and Elizabeth H. Schroeder.

Wini had a green thumb, enjoying gardening and flowers. She enjoyed sewing, knitting and crocheting, and chatting with friends on the CB radio where she was known as “Triple 5”. She was a wildlife enthusiast, and loved the companionship of her many pet cats and dogs throughout her life.

Friends may call at Van Matre Funeral Home in Waterford on Monday evening from 6-8 p.m. A graveside service will be held at Valley Cemetery, Dunn Valley Road, McKean, PA on Tuesday at 12:00 noon.

In lieu of flowers, her family suggests a donation to a local animal shelter in her name.