Edward John Lemock, age 91, of Waterford, passed away Sunday, September 2, 2018 at Sarah Reed Retirement Center, Erie where he resided for the past three months. 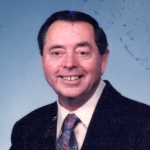 Born September 4, 1926 in Waterford, he was the son of the late Alex and Helen Bacha Lemock. Ed served in the U.S. Army in Okinawa during World War II, and subsequently was employed at General Electric, retiring after 40 years.

Ed loved the outdoors, gardening and playing horseshoes, and was an avid hunter and fisherman. He enjoyed bowling and acquired many tournament trophies over the years. He also traveled extensively with his wife and family. Ed loved his family dearly and was a fierce protector of them.

Family members that preceded him in death include his wife, Alice Bukoski Lemock who died in 1990; his son, Kenneth Lemock who died June 13th of this year; two grandsons, Jeremy and Nathaniel Lemock; and a brother, George Lemock.

Private services for the family will take place at Van Matre Funeral Home in Waterford on Thursday. Interment will be in Waterford Cemetery.

The family would like to extend special thanks to the staff at Sarah Reed Retirement Center and AseraCare Hospice for their loving care. Memorial donations may be made to Sarah Reed, 227 West 22nd Street, Erie, PA 16502, or to AseraCare, 12664 Rt. 19, Waterford, PA 16441.