Marilyn Ada Hollenbeck Free, a lifetime resident of Washington Township, completed her earthly journey on Friday, October 26, 2018, after fighting a very aggressive and rare breast cancer. Born July 8, 1938, she was the daughter of the late H. Merle and Esther (Kline) Hollenbeck. 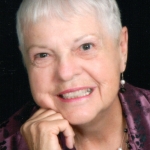 Marilyn graduated from Edinboro High School in 1956 and from Edinboro University of PA in 1986 and 1993 where she was a member of Phi Sigma Pi and was named to Who’s Who Among Students in American Universities and Colleges in 1992-93.

An active volunteer in Erie County and the Edinboro community throughout her life, Marilyn served in many different capacities including being the first woman ever elected to the Washington Township Council. She was one of five finalists for the Erie Women’s Roundtable Woman of the Year in 2006, and in recent years, she gave much of her time and energy to the Edinboro Area Historical Society. Her latest project was having Edinboro Grange #947 marked as a historical building, a project being continued by the Edinboro Historical Society and expanded to other community historical sites. Currently, Marilyn was a member of the Edinboro Grange #947 and the NSSDAR Triangle Chapter. She held a strong desire to make the tomorrows better for her community.

Those preceding her in death include her precious youngest daughter, DonnaLee Hicks, who died in 2014, and her cherished husband of 57 years, Lloyd L. Free, who died in 2015.

Survivors include her beloved children– son, William (Bill) LeRoy Free, and daughter, Rita Lynn Free Lutz; a sister, Marjorie Gigliotti; nine grandchildren and others by love; seven great-grandchildren and others by love; four sisters-in-law, several nieces and nephews, and also several special friends. Marilyn enjoyed most, the many times spent with her faith, family, and friends.

Friends may call at Van Matre Funeral Home, 306 Erie Street, Edinboro on Wednesday from 2-4 and 6-8 p.m. and may attend funeral services there Thursday at 11:00 a.m. Interment will follow at Venango Cemetery.

Memorials may be given to the Endowment Fund of the Edinboro Area Historical Society, P.O. Box 18, Edinboro, PA 16412 or to the Erie Shriners Hospital for Children, 1645 West 8th Street, Erie, PA 16505.