Ron was a 1975 graduate of McDowell High School where he was an excellent student and athlete. He was a standout football 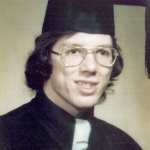 player, earning a 1A full scholarship to college. While a student at Thaddeus Stevens College of Technology in Lancaster, PA, he played football and earned an Electronics Degree. He went on to work in electronics and retired as an electronics service technician.

Family and friends may call at Van Matre Funeral Home in Waterford on Saturday from 11:00 a.m. until 12:00 noon.