Joanne Hering of Edinboro, the matriarch of the Hering family, finally lost her battle with Alzheimer’s on Tuesday, October 30, 2018 at age 79. Born on March 6, 1939 in Cleveland, OH, she was the daughter of the late William (Bud) and Helen Nock.

Joanne was raised in Chardon, Ohio and later moved to Townville, PA to raise her family. She worked in medical records at the Meadville Medical Center, but her life was dedicated to being a mother and grandmother. Joanne devoted her life to teaching and nurturing her children and grandchildren. She was the key in the raising of two generations of the Hering family. 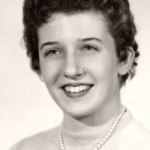 Joanne was the ultimate mother. Her life revolved around taking care of her family. A wizard in the kitchen, she raised, froze and canned all the vegetables her growing family would need. She always made sure that everyone had a hot meal, even if you were miles from home, working in the hayfields. Joanne was the master strawberry jam producer. She worked culinary magic preparing the fresh beef, chicken and pork raised on the farm. Joanne was an amazing cookie maker and her homemade candy bars were top of the line. She even found the energy to always make pizza, from scratch, for family television nights. Joanne was an extraordinary seamstress creating clothes for her family out of some very unique patterns. Joanne even created an entire wardrobe from scratch for her daughter?s Barbie dolls. Joanne was an award-winning designer of the most creative children’s Halloween costumes. In her spare time, Joanne designed crafts that hung all over her house for every holiday. She also was a talented producer of ceramics. She would use these ceramic creations to highlight the flower 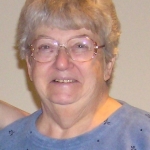 gardens that surrounded her house.

In addition to her parents, she was preceded in death by a sister Cheryl Wolfson.

Friends and family may call at Van Matre Funeral Home in Edinboro on Thursday from 5:00 until 8:00 p.m., and may attend a funeral there on Friday at 11:00 a.m. Chaplain David Miles of Heartland Hospice will officiate. Interment will follow in Edinboro Cemetery.

In lieu of flowers please make donations to the MS Society, the Alzheimer’s Association, or do a kind act for someone in need.