Home/Waterford/Nishnick, Stephen B.
­
Previous Next

Stephen B. Nishnick, age 72, formerly of Waterford, PA passed away unexpectedly in his sleep on Thursday, October 18, 2018. Born August 3, 1946 in Pittsburgh, PA, he was a son of the late Peter (Doc) Nishnick and Wilma (Polly) Bargerstock Nishnick. 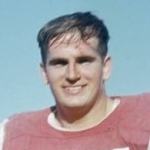 Steve grew up in Waterford and graduated from Fort LeBoeuf High School where he was a standout football athlete. He continued to play football at Edinboro University where he earned his bachelor?s and master?s degrees. His achievements in football included the Wall of Fame at Fort LeBoeuf High School, the Erie All ECL Team, the All-Time Athletic Team at Edinboro University, and the All-State College Football Team.

As a career school teacher, Steve taught for 35 years in the Fort LeBoeuf School District. He was proud to return to his alma mater to teach and also coach for many years, and felt privileged to coach his two sons in football and support his daughter playing basketball — “One Heartbeat.? Whether it was coaching or teaching, his passion was getting students and athletes pushed to their fullest potential lasting a lifetime.

Married for 49 years, Steve married Alice Michael in 1969. After retiring they moved their residence to Greenhurst, NY and enjoyed boating and fishing on Chautauqua Lake, and traveling around the country in their motorhome.

In addition to Alice, Steve is survived by three children- Chris Nishnick and his wife Christa of Northeast, PA, Amy Nishnickof Cleveland, OH, and Brandon Nishnick and his wife Samantha of Raleigh, NC; six grandchildren; three siblings- Peter A. Nishnick and wife Pat of Virginia Beach, VA, Dave Nishnickand wife Donna of Erie, and Peggy Nishnick Hawthorn of Beaver, PA; and his sister-in-law Connie McClain (Dick) and brother-in-law Fred Michael (Brenda). He was preceded in death by his brother- and sister-in-law, Carl and Pat Michael.

Friends may call at Van Matre Funeral Home in Waterford on Sunday, October 21st from 3:00 until 6:00 p.m. Funeral services will be held there Monday morning at 11:00 a.m. officiated by Rev. Gary Donaldson of Asbury United Methodist Church. Burial will follow in Waterford Cemetery.

In lieu of flowers, contributions may be made to the Ft. LeBoeuf Foundation, PO Box 810, Waterford, PA 16441.