Darrel Nelson Daniels, age 63, of Cambridge Springs passed away peacefully on December 13, 2018, at Marquette House in Meadville. Darrel was born on April 01, 1955, in Meadville the son of James Henry Daniels and Nellena Ann Phelps Daniels. He graduated from Cambridge High School with the class of 1973, and then joined the U.S. Air Force and served in active and reserve duty for over twenty years. For forty years he worked as a welder and fabricator. He had a good job, a good life, and a family who loved him. 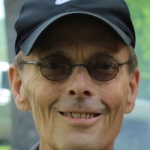 He married Patricia Jo Burnley Kondzielski Daniels on December 18, 1988, and she preceded him in death on January 09, 2005.

Survivors include his parents, James and Nellena Daniels; his brother, Terry Daniels and his wife, Barb of Waterford; his sister, Tena L. Kachik and her husband, Jeffrey of Cambridge Springs; his sister, Laurie A. Lint and her husband, George of Waterford; stepdaughter, Missy Rhodes of Wilmington, NC; stepson, Matthew Kondzielski of Meadville; and several nieces and nephews.

Friends are invited to call at the Van Matre Funeral Home in Cambridge Springs on Sunday, December 16, from 6 to 8 p.m. Interment will be at Millers Station Cemetery.