Kenneth Edward Docter, age 85, of Millers Station passed away December 14, 2018, at Edinboro Manor.  Ken was born on February 23, 1933, in Rockdale Township the son of Rexford and Georgia Daniels Docter.  He graduated from Cambridge High School with the class of 1953, and married Betty H. Johnson on July 19, 1986. He worked for General Electric 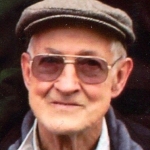 in Erie for over 40 years, retiring in 1995. He enjoyed traveling, making latch hook rugs, square dancing, working on his tractors, and going to the casino.

He was preceded in death by stepson, Phillip Johnson; sister, Gloria Hatheway; and brother, Bill Docter.

Friends may call at the Van Matre Funeral Home in Cambridge Springs on Monday, December 17, from 4-8 p.m. A funeral service will be held at 8 p.m. with interment in Millers Station Cemetery.