Dolores was born on April 1, 1937, a daughter of the late Theodore and Lillian Dzik.

Dolores graduated from Conneaut High School. She then went on to St. Francis Nursing School in Pittsburgh where she became 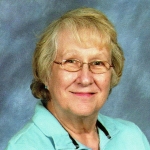 an R.N. Dolores did home health care as well as worked in a number of hospital locations until her retirement.

In addition to her parents, Dolores was preceded in death by her beloved husband, Louis L Keiser and a daughter, Laura in infancy.

Dolores has been laid to rest along side her husband at the Waterford Cemetery.