Robert Lee McClellan, age 84, of Woodcock Township passed away on February 19, 2019, at Edinboro Manor. Robert was born on March 4, 1934, in Union City the son of Ralph McClellan and Charlotte Mitcham McClellan. In 1952, Bob 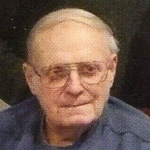 enlisted in the U.S. Army, served a tour of duty in Korea and was honorably discharged in 1955. On October 13, 1959, he married Jean Louise Graham.

Bob helped build and manage Lori Lanes in Cambridge Springs. In 1965, Bob began his auto body technician career working for Walker Brothers Buick Chevrolet in Edinboro, retiring in 1996, after thirty-one years. He thoroughly enjoyed his country home and property, spending time with his children and grandchildren and attending their activities.

Friends may call at the Van Matre Funeral Home in Cambridge Springs on Saturday, February 23, 2019, from 1-4 p.m. and are invited to a funeral service to be held there at 4 p.m. with Pastor Curtis Clark of New Beginnings Church of God in Meadville officiating.