Norman Leon Sauers, age 71, of Edinboro passed away at his home peacefully on February 17, 2019. He was born in Erie on June 6, 1947, the son of the late Leon Milton Sauers and Margaret Minch Sauers. After graduating from 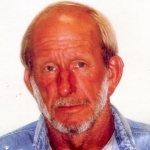 General McLane High School in 1965, Norm entered the U.S. Army and was a Vietnam veteran serving from 1965-1968. On April 20, 1968, he married his high school sweetheart, Victoria Szymanowski.? He had worked as a mechanic for Fleet Sales of McKean, as a heavy equipment operator for Ray Showman and Sons, Chivers Construction, and for Excavating Specialties, Inc., Jim (Slim) Sterrett, owner, and? retired in 2016.

Norman was known to many as “Hap” or “Vern.” Early on he loved playing men’s softball with his brother John, hunting, camping, golfing, and backyard volleyball where he was known to throw in a back handspring or two. In his latter years, Norm enjoyed walking through his woods, spending time with his dog Joe, watching football, and reading books. For those who knew him well, he took much pride in mowing his lawn. He was liked by many and always looked forward to his “Sunday services” with friends.

“Though let’s be honest, the man who was once known as “Hap” became quite a peach to be around in his latter years: short tempered, bearish, and testy to say the least, but our love for you , Dad, never wavered.”

He is survived by his daughter, Nicole Marie Varee, and her husband, Jeff of Conneautville; his daughter, Heather Lee Blore, and her husband, Chris, of Covington, OH; his grandsons: Zachery, Gavin, Colin, Grant, and Vaughn; his step-grandsons: Jordan, Ben, and Nolan; his brother, John Sauers, and his wife, Cathy, of Erie; and his sister, Margaret Elaine Crandall, of Waterford.