Shirley Elaine Matelock, age 83, of Woodcock Boro went to be with the Lord at UPMC Hamot on April 22, 2019, after a short illness. Shirley was born on April 10, 1936, in Woodcock Boro, the daughter of the late Harold Joseph Herman and Helen Elaine Humes. She graduated with the Cambridge Springs High School class of 1954, and married John Ronald Matelock on 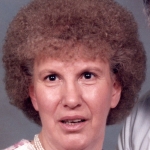 October 3, 1992. For over fifteen years, Shirley worked as a nurse at Wesbury and also for more than eighteen years in the Office of Students with Disabilities at Edinboro University, retiring in 2005. Shirley attended Cambridge Springs Christian and Missionary Alliance Church, enjoyed flower arranging, gardening, and being outdoors.

She was preceded in death by son, David Allen Gill; and granddaughter, Danielle Kay.

Friends may call at the Van Matre Funeral Home in Cambridge Springs on Friday, April 26, from 1-3 p.m. and are invited to a funeral service to be held there at 3 p.m. with the Rev. Delroy Simpson officiating. Interment will be at Venango Cemetery.