Ronald Lyle McCall, age 85, lifelong resident of Waterford, died Friday, April 12, 2019 at Edinboro Manor after a long illness. Born in Belle Valley on November 4, 1933, he was one of five children of the late Wallace and Dorothy Davis McCall. He married Amber Owens on August 22, 1953 who preceded him in death on July 7, 2014.

A loving husband and a great father and grandfather (“Poppy”); honest and hardworking with a good sense of humor — this is how Ron will be remembered by his family. He enjoyed playing cards, bowling, square dancing, golfing, woodworking, and spending time with his family. In high school he was a standout athlete in basketball and football, and he was nicknamed the “fleet-footed flash.” Following high school, Ron served in the U.S. Army. 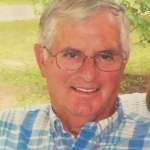 Ron retired in 1998 as a salesman at Humes after more than ten years of service. He was an active member of Asbury United Methodist Church and was involved in various committees, projects, and mission trips.

Ron also had two brothers who preceded him in death, Wallace Jr. and Marshall.

The McCall family would like to express thanks to the caregivers at Edinboro Manor for their loving care, and to family and friends for all their support during this difficult journey.

Memorial gifts may be made to Asbury United Methodist Church.