Catherine Ann Dombkowski, age 54, of Waterford Township, died from complications due to kidney disease on Tuesday, July 23, 2019 at UPMC Hamot. She was born in Pusan, South Korea on October 8, 1964 and was the daughter of the late Donald Cross and Pong Yong Pak Smith.

Cathie grew up in New Hampshire and graduated from high school before entering the U.S. Navy and serving on the USS Lexington AVT16. She married Ron Dombkowski on October 5, 1984, and together they lived in various places while Ron served in the U.S. Air Force. In 1991, they moved to the Waterford area where they raised their family. 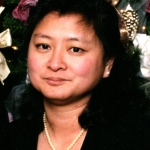 Cathie was a Licensed Practical Nurse and over the years worked at Great Lakes Rehab, the Gertrude Barber Center, and, most recently, Erie Homes for Children and Adults. She had a loving heart and was gifted in caring for handicapped and disabled people. She was a member of All Saints Parish in Waterford.

Cathie’s family will remember her as a loving and caring wife to Ron for almost 35 years; a devoted mother to Ronald J. Dombkowski II and Jessica of North East, and Anthony V. Dombkowski and Christopher A. Dombkowski, both of Waterford; and “Jamma” to her grandsons Xavier and Vince, whom she enjoyed watching grow up and participate in sports and theater events.

Other survivors include her parents-in-law, Ronald and Helen Dombkowski of Summit Township; her brothers- and sister-in-law, David Dombkowski (Colleen), Bobby Dombkowski (Jennie), Doug Dombkowski (Katie), and Denise Borsuk, all of Erie; and her many close and cherished friends.

In addition to her parents, Cathie was preceded in death by her step-father who raised her, Frank Tice Smith; and a brother, Mitchell, who passed away at birth.

Friends may call at Van Matre Funeral Home in Waterford on Friday from 4-7 p.m. A prayer service will be held at the funeral home Saturday at 10:20 a.m. followed by the Mass of Christian Burial at All Saints Parish, 11264 Rt. 97 North, Waterford at 11:00 a.m. with Rev. Gregory Passauer as Celebrant.